Below is a link to what I consider “Internet Treasure”…..something that Cristina and I stumbled upon one night after a close friend of ours gave us a chromecast device…..which one uses to beam or “cast” videos on to their television.

Alas, a midst all of the funny fluff, we found the original Mother Teresa of Calcutta documentary, in it’s entirety, on Youtube. Needless to say, although it was a week night, “let’s just watch a few minutes…..” quickly turned in to a prayerful meditation on Love.

Mother Teresa, for any of those who haven’t been with us since the inception of this blog, is one of our patrons. We didn’t choose her, she chose us. And in some of life’s most difficult moments, even when we probably tried to keep her out of things, (for fear of what she, one of our closest friends, might have asked of us) she always had a way of popping back up…..and asking us to give love to someone around us. You know, love…..the kind that hurts. 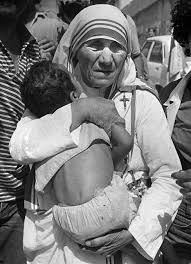 You see, as I grew into adulthood and got onto my high horse during my time of new-found Faith “ownership”, (which for me, beyond simply defending Christ’s Bride, included a bit of my own pride) I would get really annoyed when those that sought to attack the Church’s teachings, would often use saints like Mother Teresa as a sort of justification for not sticking to Doctrine and just simply “loving everyone”. Although I had no way of articulating it at the time, I knew that so-called “love” to be exactly what Pope Francis condemned this past Saturday, at the close of the Synod. A “love that is tainted by:

“….a destructive tendency to goodness, that in the name of a deceptive mercy binds the wounds without first curing them and treating them; that treats the symptoms and not the causes and the roots.” – Pope Francis,

Mother Teresa is not, nor ever was, all about that kind of “goodness”. The problem for most ultra-conservatives is that many, including Mother Teresa, chose not to explicitly preach and teach with theological words….but rather, to love. Truly love, with a love that suffers together…..a love that, when the timing (and one’s heart) is right, leaves the door open, ever so gently, for God to truly heal the deepest “causes and roots” of our own slavery to sin.

This is what Mother Teresa and now Pope Francis (along with MANY others in history) have been teaching us……and it’s a difficult teaching because it is UNCOMFORTABLE. We don’t “get the last word” in……and some times, that “surrender” of not getting the final word, takes everything out of us!

Sure, they can dine and carry-on with those who even appear to be “enemies” of Christ and His Church, but they know where they stand – firmly in Christ.

Pope Francis does an off-the-cuff interview and is asked a hypothetical question about someone suffering from SSA… .. and his response relates that if a person is seeking Christ and remaining chaste… (paraphrasing here) “Who is (he) to judge?”….the media goes WILD  “Pope Francis approves the gay lifestyle!” ……not quite. Shortly after the encounter, in one of his homilies at daily mass, he preaches about family and marriage only being between a man and a woman.

Mother Teresa spent hour upon hour being with the sick and dying, usually not explicitly nor deliberately teaching/converting them to the Catholic Faith, but then she spent hours in Adoration with Our Lord (every day) and countless people throughout the world convert to Catholicism through her example.

What’s my point? I’m not entirely sure…..but one thing I am sure of is that both Pope Francis and Mother Teresa know/knew WHO they live(d) for – Christ and His Bride. Although Pope Francis would never deliberately confuse anyone or desire for them to be unclear on Church Teaching, but it is as if he  is saying “I’t’s MUCH more important to me that each individual person walks away knowing that I love them and even more, that Christ loves them…..than it is for someone to be 100% educated on a doctrine or a dogma”

It seems like every time the media interviews and confusions arise with Pope Francis, the Synod, prudential judgments made by Cardinals and Bishops (ie – St Patrick’s Day parade?), I hear a resounding “I just don’t know anymore” from my Catholic friends and family. I often have the same reaction.

Maybe, just maybe, Christ desires for me to be at an even deeper place than what I’ve been used to, than what I’m comfortable with. Maybe my response should be “I just don’t know anymore (about anything!). BUT, I trust.”

Besides, if I don’t know everything like I used to pridefully think I did, He is able to enter in and mold and guide me how He wants, not how I want Him to.

In the meantime, if you have the time, pray through this youtube treasure. No doctrine here, no mystical or fantastical miracles revealed at the end. Just pure, tough and real love. Perhaps that is what God wants us all to cling to?